skip to main | skip to sidebar

Dangerous is the eighth album by Michael Jackson, released on November 26, 1991. It became his second to debut at #1 on the Billboard 200 album chart, where it spent the next four consecutive weeks. In the space of 17 years, media sources state the record has sold as much as 32 million copies worldwide, with 7 million certified shipments in the United States alone, making it a faster selling album than his previous record Bad. The album won one Grammy for Best Engineered Album - Non Classical won by Bruce Swedien & Teddy Riley[2] and is the most successful New Jack Swing album of all time.[3]. Dangerous was the first album ever to spawn eight consecutive UK Top 20 hits. "Dangerous" was Michael Jackson's second best-selling album (first was Thriller). 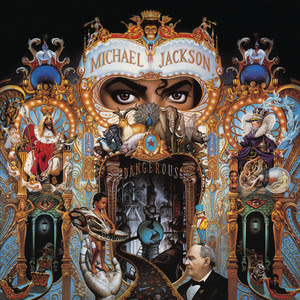 According to the sleeve notes on the later remastered edition of the album, recording sessions began in Los Angeles, California at Ocean Way/Record One Studio 2 on June 25, 1990. The sessions ended at Larrabee North and Ocean Way Studio on October 29, 1991, being the most extensive recording project of Jackson's career at the time (over 16 months compared to the usual 6 spent for his previous three studio albums).

In March 1991, Jackson signed a 15 year, 6 album deal to Sony Music. The press reported that Sony actually handed over $1 billion to Jackson, but that was not the case. At the time, Sony estimated that if the albums Jackson released under the new contract sold at the same level they currently sold, it would generate over $1 billion in profits for them. Additionally, Jackson was awarded the highest royalty rate in the business. By the time the contract expired in March 2006, Michael would have been paid $45 million from Sony ($1 million a year, plus $5 million per album delivered). This does not include money he would have also earned from sales of albums, singles, videos etc. Under this contract, Jackson is estimated to have earned $175 million from album sales alone.

At this point, Dangerous was already in the making, under the producing talents of (Quincy Jones recommended) 22 year old New Jack Swing inventor Teddy Riley and Grammy-winner Bill Bottrell. The previous album, Bad, was Jackson's last designed for the LP industry, conforming to the usual 10-song within 50-minute format, whereas Dangerous was a 77-minute, 14-track compilation, which almost dared the capacity of early Nineties compact discs. Consequently, the record was released as a double album in vinyl.

The album was initially released in a large box with a picture of Jackson's eyes, which folded open to reveal the normal cover (painted by pop surrealist Mark Ryden), in pop-up card, with the CD and booklet in the bottom.

Dangerous was a highly anticipated album, as shown by an incident at the Los Angeles International Airport, where a group of armed robbers stole 30,000 copies before its official release.[4]

Dangerous was released on November 26, 1991 with record-breaking sales. Dangerous was Jackson's fastest-selling album ever in the United States with four million shipped in under two months. This broke the sales record for Bad in 1987, in twice as many months, but the same circulation.

Dangerous also debuted at #1 on the Billboard Hot 200 Album Charts with 326,500 copies sold in one week of release. It also managed to stay in the Top 10 for a week in the 65th week, reaching #10 after Jackson received the Grammy Legend Award at the 1993 Grammy Awards. The album received a huge boost in sales in 1993 when he performed at the Super Bowl and was interviewed by Oprah Winfrey. This meant Dangerous spent 117 weeks inside the Billboard 200, thirty weeks over Bad. The RIAA certified Dangerous 7x platinum, for shipping 7 million copies.[5]

In the United Kingdom, the album was even more successful. It debuted at #1, holding off U2's Achtung Baby, but in the second week it was replaced by Queen's Greatest Hits II. Dangerous spent 23 weeks in the Top 10 right up until the 69th week and a total of 96 weeks inside the Top 75.

In worldwide sales, in the UK and US, Bad were 48% of the total worldwide sales. For Dangerous, it is 33%, making it more successful globally (not just restricted to those two regions). The singles from Dangerous were mostly bigger hits in Europe and Australia and more were released than Bad. These were spectacular sales records compared to Jackson's earlier two albums, Thriller and Bad in many European countries and Australia. Dangerous sold very well in both Asia and South America, two emerging and growing record markets.

"Black or White" was produced and co-written by Bill Bottrell and was an instant success. It was, in fact, the biggest hit single since 1982's "Billie Jean". Other singles were successful too, and in all, nine singles were released. "Dangerous" itself, was planned for a single at the end of 1993 but canceled due to the child molestation allegations, and was the same number of singles as Bad. Despite this, "Dangerous" has been performed on stage in since the second leg of the Dangerous Tour towards Jackson's last concert at the Apollo Theatre in 2002. All nine singles were released in the UK, seven reaching the Top 10 - an achievement Jackson had never made before. The major successes from the album were "Black or White", "Remember the Time", "In the Closet", "Heal the World", "Who Is It", and "Will You Be There". In the US, the singles did not perform as well as those from Thriller or Bad - Dangerous produced four Top 10 hits out of seven singles released there.

The album was supported by the Dangerous World Tour. Prior to the release of Jackson's next studio album, HIStory: Past, Present and Future Book I, Dangerous had already sold over twenty-two million copies worldwide.[6] In the space of 17 years, sources estimate the record has sold between 29 and 32 million copies worldwide making it a faster selling album than his previous record Bad.[7][8]

As was becoming the standard for Jackson, the album's music videos were among the most costly and innovative of their time. Several of the music videos taken from the Dangerous album had complex storylines and dance sequences, and featured cameo appearances by celebrities. The video for "Jam", directed by David Kellogg, showed Jackson and Michael Jordan playing basketball and dancing together, while "Remember the Time", directed by John Singleton, was set in an Ancient Egyptian palace, and starred Eddie Murphy, Magic Johnson and Iman as the pharaoh and his queen. "In the Closet" featured Jackson and supermodel Naomi Campbell as lovers. The director of the video was photographer Herb Ritts, who also photographed Jackson in a series of promotional shots for the release of the Dangerous album. A "Dangerous" video was filmed in 1992 by avant-garde director David Lynch, and considered a rarity among collectors.[9] The video clip for "Who Is It" is notable as it was directed by David Fincher who later went on direct a number of films including Se7en, Fight Club and Zodiac.

"Black or White" was originally over ten minutes long, premiering simultaneously on November 14, 1991 on MTV, VH1, BET, and FOX. The video featured one of the earliest examples of computer-generated morphing. The last four minutes of the video also induced much controversy, as it depicted Jackson smashing store windows and destroying a car with a crowbar. However, this destructive behaviour was intended to imply a message of anti-racism and racist graffiti was added in later versions to make the violence more understandable. The music video was also controversial because of Jackson's sexually suggestive dance, which included the crotch grab as well as zipping up his pants. MTV and the other music video networks decided to excise the last four minutes of the "Black or White" video for all subsequent airings, and Jackson issued a statement apologizing to anyone who had been offended, and explaining that he tried to interpret the animal instinct of panthers into a dance. The video featured Macaulay Culkin and an appearance during the morphing scene by young Tyra Banks and was directed by John Landis, also the director of the "Thriller" short film.

Alternative editions of the albums became very rare, products almost exclusive for record collectors. The most notable was an edition released in 1992 that folded out to become a diorama.

An international re-release of the album (entitled Dangerous - Special Edition) took place on October 16, 2001, just two weeks before the release of Jackson's studio album Invincible. Simultaneously, Special Editions of Off the Wall, Thriller and Bad were also released. For the occasion, Dangerous was digitally remastered and included a slipcase and a brand new 24-page colorful booklet with revised artwork and previously-unseen photos. The new edition managed to reach #108 in the UK charts (the only one of those four re-releases that didn't enter the Top 75 there). Because of the constraints of Dangerous' running time, previously unreleased songs were not included, however many of them were eventually leaked onto the internet along with various demos of other tracks that appeared on the album. In 2004, some of these leaked tracks were officially released on Michael Jackson: The Ultimate Collection (namely the "Dangerous" demo and "Monkey Business").

Posted by Publisher at 8:23 PM No comments: